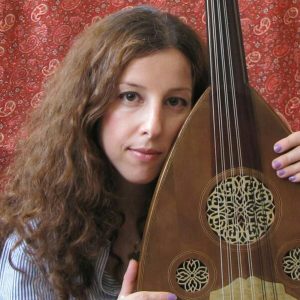 Azadeh Shamee, is an Iranian Oud player, Persian literature professional and Master of Arts Musicology student at Sydney Conservatorium of Music, Australia. Born in 1979, Iran, she studied Oud and Persian music theory with Negar Bouban PhD since 2005 and performed in various concerts in Iran and Australia. Being a creative writing teacher and having Bachelor of Arts in Persian Literature, she finds Oud playing and her literature background strongly intertwined as Iranian music and poetry are. As a musician, Azadeh finds Mansour Nariman, Mohammad Firouzi and Negar Bouban as her major influences. She is currently researching on a historical comparative subject based on Oud in Iran and Andalusia with Associate Professor Kathleen Nelson PhD as her supervisor. She currently resides Brisbane, Australia. For more information visit: www.azadehshamee.com